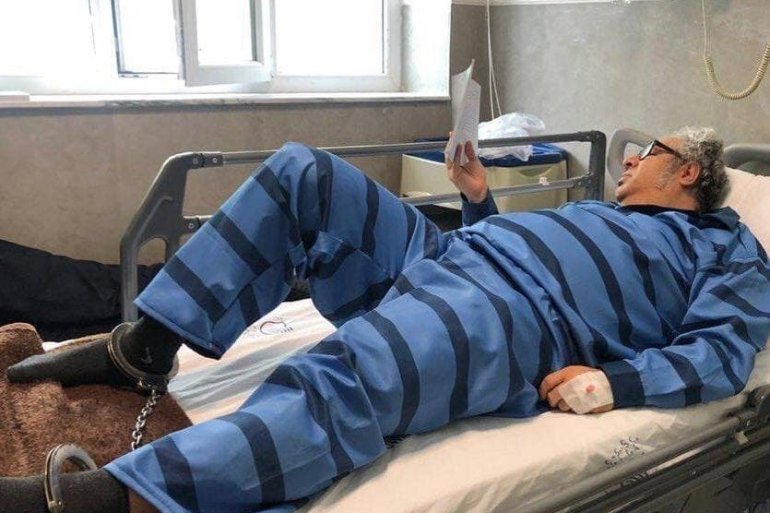 No dream is further away.

Iranian writers and the intellectual community are once again in deep mourning.  Mr. Baktash Abtin, poet, writer, filmmaker, and one of the secretaries of the Writers' Association of Iran, died on January 8, 2022 in Sassan hospital in Tehran.   He had been in prison for months where he caught Covid twice.  Due to the refusal of prison officials to let him receive a timely medical leave and be treated, he passed away from this deadly disease. It was an intentional negligence.  He had been sentenced to six years in prison on trumped-up charges of "propaganda against the regime" and "conspiracy against national security". The judiciary carried out this cruel and political sentence, despite being aware of his underlying illness during the Covid epidemic.

Baktash Abtin, like other notable Iranian writers, died an untimely death solely and intentionally because he was outspoken.   Abtin wrote poems in praise of freedom and against authoritarian rule.  He wrote, “The virtue of struggle, perseverance, and the demand for citizenship rights is the missing link in contemporary Iran."   Before his death, he declared his readiness to sacrifice "Sweet Life" for freedom.  After years of enduring the scourge of tyranny and censorship, Baktash's suffering body will soon be buried under extreme security measures but we are certain that his films, poetry and writings will never be buried. His commitment to the struggle for freedom and against censorship was the center of his work.   By living beyond his literary and social activities, Abtin demonstrated his loyalty to the historical desire of the Writers' Association of Iran from before the Revolution of 1979, to "freedom of thought and expression without exception.” In this regard, it is appropriate to congratulate the "Writers' Association of Iran" that such a dedicated writer was among its members.

We, the three secular Republican and Democratic parties and organizations, hold the judiciary of the Islamic Republic of Iran, and especially, Ayatollah Ali Khamenei, responsible for negligence and causing his death.   Historically, the behavior of the judiciary and security apparatus against those who have challenged the status quo and demanded freedom, justice and human dignity, shows that in addition to directly killing dissidents and critics, they use their power not to provide proper access to medical facilities to political prisoners as part of their policy of intimidation and terror.

The death of Adel Kianpour, a political prisoner in Ahwaz central prison last week, is another example of this inhumane and cruel practice.

We express our condolences to the family of Baktash Abtin and members of the Writers' Association of Iran, and invite the people of Iran to express their sympathy for this great loss in a way that they deem appropriate.  As usual, government security agencies, have forbidden any funeral or gathering to be held by the Writers’ Association of Iran.   Any protest against the death of Baktash Abtin is in fact a support for freedom, and for the independence of art and literature, and the community of committed artists.

We demand an immediate end to the cruel imprisonment of political and ideological prisoners, and provide the necessary medical needs of the prisoners.

We call on the international community, especially Pen International, to condemn the Islamic Republic of Iran for the death of Baktash Abtin and to demand the release of the imprisoned members of the Writers' Association.

Union for Secular Republic and Human Rights in Iran